Let me backtrack to why my fiancé and I suddenly went on a trip to Europe with just 1.5 months notice. The short version of the story goes like this: I quit my job and I desperately wanted to go abroad and detox and be somewhere where I’m a complete outsider and look at art and all that stuff that detoxing entails. Somewhere in that time I got engaged, which also led to me feel like: oh, shit, I’m engaged, soon to have a wedding, with no job, but I’m spending $3,000 on a trip to Europe. Smart. So, we went to Europe, it was awesome, and I did look at art and stuff.

Our first stop was Berlin, a beautiful city with plenty of scenic parks, great museums, good food, excellent public transportation, and the added perk of stylish people with great taste. We fell in love with Berlin the moment we walked the streets of Mitte – I mean, I did at that moment. Birkenstocks and makeup-less women are the norm there!

When planning our itinerary, I found that most blogs and online reviews led us to the wrong places (especially Yelp in Berlin – Yelp reviewers who are visiting Berlin review some very average restaurants very highly). We’re into nice parks, art, design, good food and style so if you’re going to Berlin and are into the same things, hopefully this list will help you out.

(View of the courtyard from our window.)

First off, we had the most amazing hotel experience while staying at the Circus Hotel (which also offers nice hostels and apartments at lower and higher rates). I’d highly recommend staying here for a nice, clean room that’s affordable and eco-friendly. The hotel has a pretty courtyard where you can eat breakfast, a rooftop that offers a great view during sunset, friendly staff and free amenities. The hotel’s location is central, located in East Berlin in the pretty Mitte neighborhood (if you’re familiar with San Francisco, it’s like the Mission of Berlin). It’s close to public transportation and around good shops and good food too. Seriously, book here.

The Jewish Museum in Berlin is really amazing, especially the buildings themselves and the Garden of Exile, a darkly beautiful monument with a tilted foundation and tall pillars. They talk a lot about the museum’s architect, Daniel Libeskind, who deliberately designed the museum to have different sections so visitors could experience every aspect of Jewish history in Germany. It’s such an amazing space and you’ll learn plenty about Jewish history and culture that otherwise seems invisible in Berlin. It’s a large museum, so I’d recommend giving yourself a couple hours to soak in and appreciate the space.

(Across from the memorial is a staircase where we had a view of the desolate wall next to a green park.)

The most memorable place for us to visit in Berlin was the Berlin Wall Memorial on Bernauer Straße, where the German division is still exactly how it was during the 1960s to late 1980s. Walking on both sides of the border, touching the walls, looking through the cracks and being stared down by the watchtower was a surreal and sad experience. I’m not sure that there’s any other way to describe it. 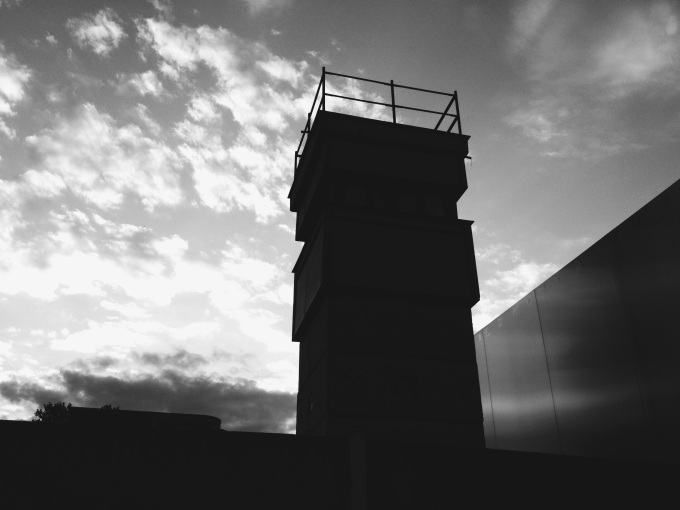 Next to the memorial is also a sort of outdoor museum where you can watch footage showing how people then lived with the wall on Bernauer Straße, rebelled and finally overcame it. The actual foundation of an old apartment building that was torn down by the division and a church that was caught between borders and eventually demolished are also at the site. There was a lot for us to watch, see, experience and read at the memorial and we’d definitely recommend visiting it.

If you’re a book lover, especially of art and design books, fashion magazines, or coffee table books, definitely visit do you read me?! in Mitte. The book shop had a really great selection of magazines, but seeing as we were in Berlin touring, I picked out The Berlin Design Guide instead. Another book shop that I couldn’t but wanted to visit was the Ocelot. It looked like a goodie inside too.

U-Bahn at Rosenthaler Platz, Mitte. do you read me?!

Berlin is all about their parks. The Volkspark Friedrichshain has beautiful statues and fountains, one which families, kids and their dogs were dipping into to cool off. I even did the same after a hot afternoon of touring the city. This family park is amazing with outdoor restaurants to eat dinner at or watch a game. Apparently there are still bunkers from the Nazi military in the hills that you can visit too.

The biggest park in Berlin that you can’t miss on a map is the Tiergarten. Tiergarten offers open walking trails, rivers and tall trees that create the perfect setting for a long, relaxing walk or bike ride. The Tiergarten is so close to popular landmarks, and it was easy to hit up so many of them in a day. After visiting the Kaiser Wilhelm Memorial Church in Charlottenburg (a church that was partially destroyed during World War II), we walked through the Tiergarten from the west end, went to the Victory Column, rode a ferris wheel where we got a great view of Berlin, ate some currywurst at the east end of the park where there was preparation for the World Cup celebration, visited the Brandenburg Gate (which was very crowded so we spent only a few minutes there), and then walked to the Holocaust Memorial. The park is located right in the middle of Berlin, so it’s great to plan a touristy itinerary when visiting.

The Volkspark am Weinberg is another nice park to just sit, relax and have a picnic. It was just a few blocks away from our hotel, and reminded me a lot of Dolores Park.

Seeing as this post just got WAY long because clearly I’m in love with Berlin, I’ll be writing another post on the rest of my favorite things to eat, see and do in a part 2 next week!

You are currently reading what to eat, see and do in berlin (part 1) at goodnight, sleep write..